A driving school that understands young drivers
No Nonsense, No Yelling, No Bother!

A student only driving school with a no yelling guarantee

At StudentEDT, we’ve been in this business a long time. A VERY long time. We do it because we love it, but there’s one thing that really grinds our gears - seeing GOOD drivers fail their driving test. We’re not going to sugar coat it - we’ve seen many learners pick up a grade 3 fault - and what’s really frustrating is that we know these drivers have what it takes to pass. But nerves get in the way. 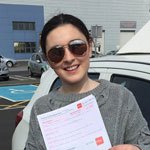 Being nervous about your driving test is normal… but sometimes it can stand in the way of success. We’ve seen many learners drive like old pros during their lessons, and then seemingly forget everything they’ve learnt on the morning of the exam. It all just seems to fly out the window (hint: keep your windows tightly closed when you’re driving to the test centre, just incase!). We think knowledge is key. After all, we’re only scared of the unknown, right? That’s why we think it’s vital that our learners know exactly what to expect on the day of their test, and are completely prepared.

Sitting in your dorm, waiting for the test, and going through every eventuality in your head? That’s a recipe for disaster if ever there was one! We’ll pick you up for one final pretest training lesson on the morning of your exam - consider it a little distraction technique. What this does is act as a refresher course for you - the equivalent of an all night cramming session, only without the empty bottle of wine on the nightstand and the heavy bags under the eyes. It gives you something to focus on other than the test, and reminds you that, really, the test is no different to a normal driving lesson. 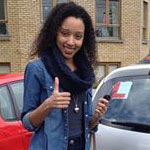 If you’ve never taken a practical driving test before, you’re probably imagining all sorts of weird and crazy scenarios. The truth is that the driving test in Ireland is actually very mundane - boring, even! You’ll meet with your examiner who will confirm your information, ask you to read a licence plate to check your eyesight, and go through a few standard questions about the vehicle - how to check oil levels, for example. Regardless of whether you’re being tested, this is the type of stuff EVERY driver should know. Remember - the test isn’t designed to challenge you, it’s there simply to make sure you know what you’re doing and can maintain and operate your vehicle safely and effectively. Easy peasy.

During the test itself, you’ll be asked to perform a few standard maneuvers, including:

If there’s one message we want to get across to all learner drivers, it’s this - your examiner DOES NOT want to see an example of perfect driving! This isn’t the Approved Driving Instructor test (that’s right, if you think YOU have it tough, just spare a thought for our ADIs who DID have to give an example of perfect driving!). What your examiner wants to see if that you can drive safely, respond appropriately to changing conditions on the road, consider other road users, and exhibit caution. That doesn’t sound too bad, does it? Certainly a lot easier than that history essay you’ve got due next week! 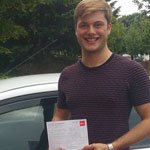 At StudentEDT, we’re fortunate that we’ve enjoyed great success rates over the years. However, it’s important to be prepared. We don’t guarantee a pass - and any driving school that does should be approached with caution. But a ‘fail’ isn’t as bad as you may think. It’s certainly not the end of the world. If you don’t pass first time, don’t dwell on it. And don’t view it as a ‘fail’ (we HATE that word!). Instead, if you don’t pass, see it as an opportunity to work on your weakest areas. We regularly work with students who have not passed with another local driving school, and these are some of our favourite learners. We’re able to see exactly where things went wrong, and work on those mistakes to create a driver that’s confident, safe, cautionary, and most importantly ready to show off their skill.

Is ‘Test’ the Right Word?

We think that part of what gets our students so nervous is that the driving test is called the ‘driving test’. This isn’t really a suitable term. To us, it’s not a ‘test’ - at least not in the way an English Literature exam is a ‘test’. We think it’s more a ‘request’. Ultimately, it’s you requesting an examiner to watch you prove yourself, demonstrate your knowledge, and show off what you can do. It’s YOUR time. Don’t waste it by being a big bag of nerves! Keep them under control, and wash them away with a celebratory takeaway and pint of beer at the end of the day (just DON’T drive home from the pub - a driving test pass and suspended licence on the same day isn’t anything to be proud of!).